March 4, 2016 admin
Global e-commerce giant Amazon has decided to set up its second largest global delivery centre outside the US in Hyderabad, which could attract a large portion of its proposed investments of $2 billion into India.
The move comes a year after the Seattle-based online marketplace firm’s decision to build one of its largest Indian fulfilment centre (warehouse) over an area of 2,80,000 sq ft near Hyderabad.
The development also comes close on the heels of Apple choosing Hyderabad to set up its largest technology development centre outside the US and Google announcing to set up a huge campus in the city. A senior Telangana bureaucrat said the state government has allotted a 10-acre land to Amazon where it proposes to build 2.9 million square feet development centre to house a 13,500 member strong team. The current headcount at Amazon development centre at Hyderabad is around 1,000 across multiple offices. 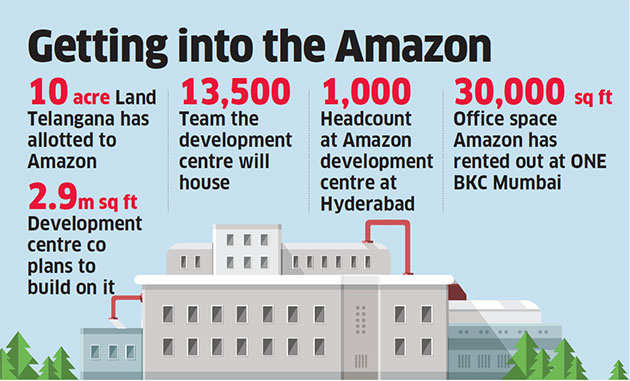 Indicating a keen interest in the Indian market, Amazon currently has a 30,000 square feet area of office space rented out at ONE BKC Mumbai and a 1.2-million square feet office space leased out in Bengaluru.
“The land for the facility (at Hyderabad) is currently under a long-lease with the Government of Telangana,” said Jayesh Ranjan, Telangana’s IT Secretary. A senior government official said Amazon would lay the foundation stone for the proposed global delivery centre on March 30, where its senior VP David Zapolksy and vice president John Morgan are likely to attend.